“Mick Ryan’s Lament: A Song in Three Acts”
An Irishman’s Journey from famine era Ireland to the American Civil War to Little Big Horn told through traditional and original songs and music

On this page is a Trailer, About the Show, About the Musicians, Program from the Show, Past Performances, and Contact Info 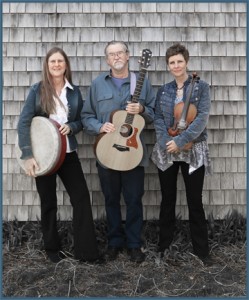 Robert Emmet Dunlap has expanded his often recorded and popular song, Mick Ryan’s Lament, into a show that tells more of the story of his fictional Irishman’s journey from famine era Ireland to America at it’s Centennial. From ballads to lively Irish tunes, the program uses new, original songs along with traditional music from the period. It combines history and legend to show the connections between Irish and American songs and music and the impact of immigration, expansionism, and war on all sides.

The song, Mick Ryan’s Lament, has struck a chord with people for it’s heartfelt tale of the ironies of war. It tells a ghost story about two brothers who escape post-famine Ireland for the Land of the Free, and fight for the Union in the War Between the States. Mick stays in the army and ends up dying with Custer at Little Big Horn; forever haunted by, and to the tune of “The Garryowen.”

Mick Ryan’s Lament has been recorded by many artists, including bluegrass legend Tim O’Brien on his 2001 CD Two Journeys, and by Tim O’Brien and Darrell Scott on their 2012 CD, We’re Usually a Lot Better Than This. Tim also performed the song in March, 2016 at the National Concert Hall in Dublin, Ireland, as part of their Imagining Home Concert Series in recognition of 100 years since the Irish Rebellion. It has also been recorded by hit songwriter Dillon O’Brian, gifted singer and instrumentalist Ken O’Malley and The Twilight Lords, world-renowned fiddler Kevin Burke with Ged Foley, country artist Ray Doyle, and Cape Cod favorites Stanley & Grimm (Sean Brennan and Nikki Engstrom). The song, recorded by Ray Doyle, was included in the documentary film, Bravo! Common Men, Uncommon Valor, about the Vietnam war.

Robert Emmet Dunlap has worked and recorded with such artists as Delaney Bramlett, L.A. hit songwriter Dillon O’Brian, Metropolitan Opera award winner Dennis McNeil, “Titanic” trad band Gaelic Storm, and was lead guitarist for Los Angeles’ premier Irish band, Ken O’Malley and The Twilight Lords (with Glenn Cornick of Jethro Tull), for eight years. His South Boston Irish heritage has led him from Southie to West Cork and Dublin, to Los Angeles, and Cape Cod. While living in Ireland, “Boston Bob” spent a year touring with bass player and rock legend Noel Redding of “Jimi Hendrix Experience” fame, and developed an increasing love for Irish tunes and ballads that he brought with him to Los Angeles. He did a weekly ten-minute spot for Irish radio from LA and also did numerous theater productions at the Celtic Arts Center in Hollywood – where Mick Ryan was born.
RobertEmmetDunlap.com

Kathi Taylor has played many styles of music in her 30 years of professional drumming – rock, blues, Cajun, Zydeco, country, jazz and Irish.  Her career began in Los Angeles in the early 1980s where she performed with several rock and country bands. Her all girl band, The Mustangs, performed frequently with the top country LA acts at the time including Lucinda Williams, Jim Lauderdale, Jeffrey Steele, and Rosie Flores. During her career, she has toured Europe and the southwest, performed in Vegas, on network TV, and played for the crowned heads of Nashville. She received a degree in drums and percussion from the Grove School of Music in LA. Kathi is also an accomplished fine artist.
KathiTaylor.com

Rose Clancy is a renowned, high-energy musician playing fiddle, mandolin and banjo at concerts and festivals throughout the Northeast while sharing the stage with some of the greatest traditional performers. Clancy’s unique fiddle style embraces Northern Irish, Scottish, and some French Canadian influences. She plays with The Clancy Tradition, and runs a high level session on Sundays from Sept to May at The Squire in Chatham MA. A graduate of the violin making program at North Bennet Street School in Boston, Clancy founded and runs The Chatham Fiddle Company which serves as a small musical venue, musical studio, as well as a repair and retail shop for hand-made fiddles crafted by Rose.
ChathamFiddleCompany.com

Program for the Show

Outside of Program (click image to see larger version) 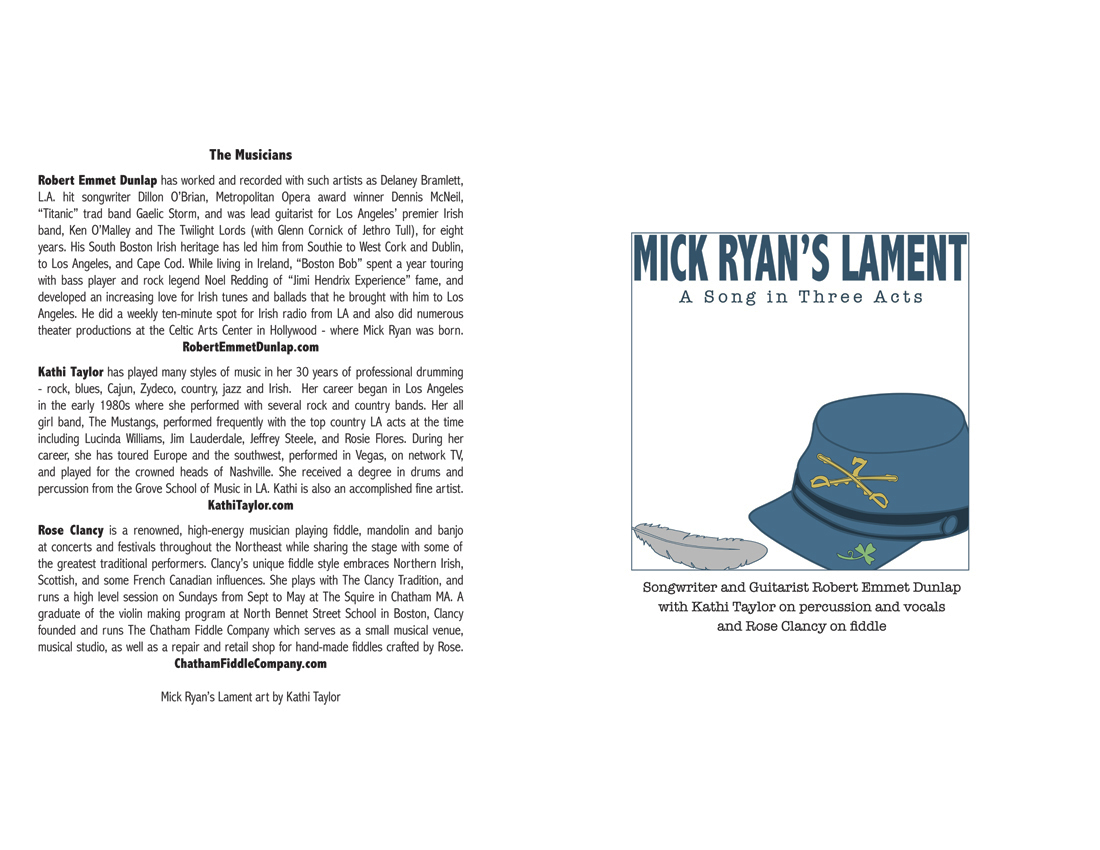 Inside of Program (click image to see larger version) 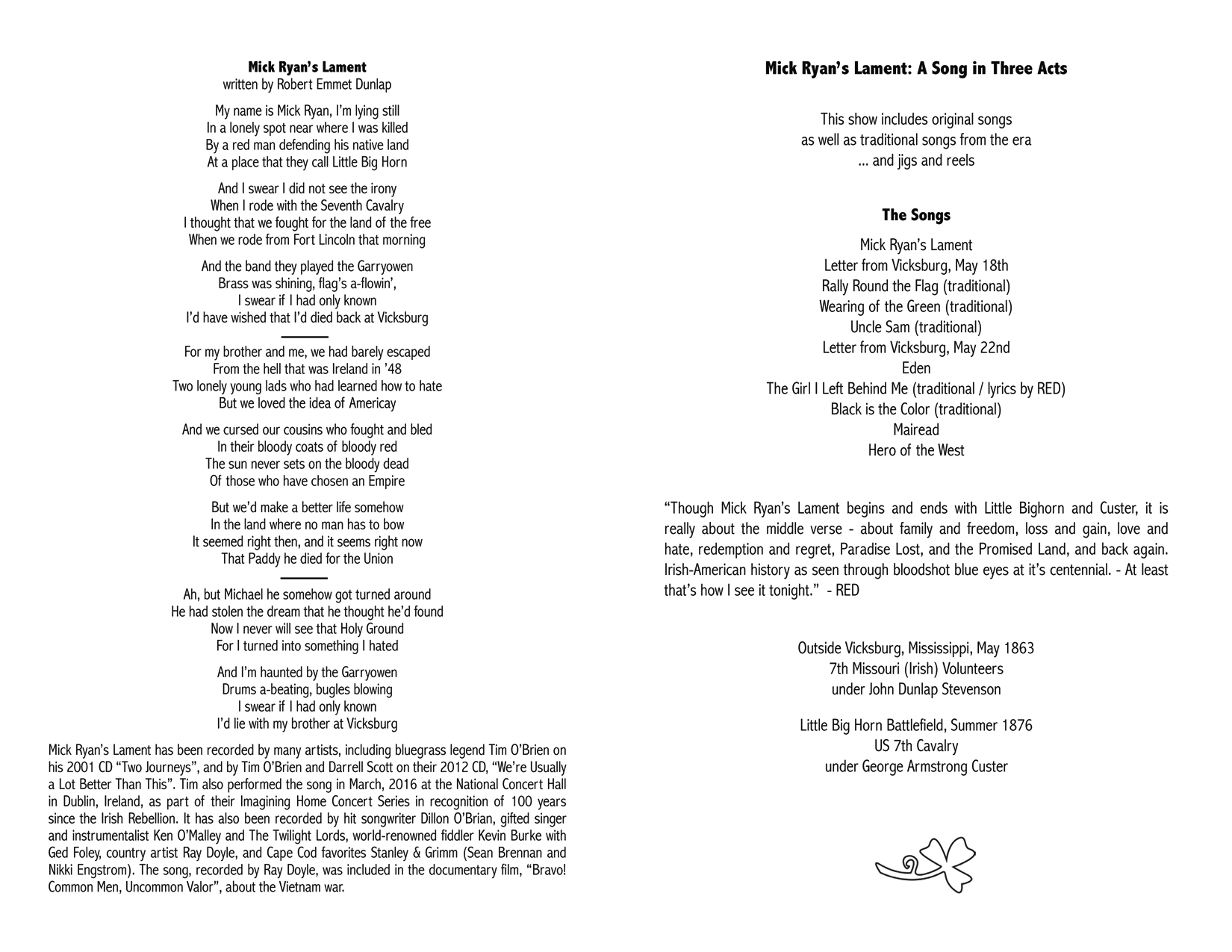 We’ve performed this show at the following venues on Cape Cod to enthusiastic audiences.

If you’re interested in booking the show or for more information, send an email to info@RobertEmmetDunlap.com.